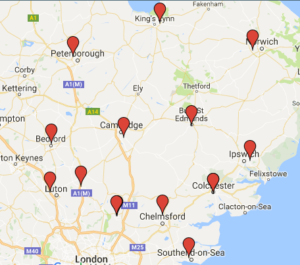 The Trauma and Orthopaedic Training programme is run by Health Education East of England.  Orthopaedic Registrars on this training program will rotate through many of the hospitals located across East Anglia. Information about each of these hospitals can be found here. Trainees appointed to the East of England orthopaedic rotation will spend the first four years (ST3 to ST6) gaining core knowledge in trauma and orthopaedics in order to prepare them for the Intercollegiate Examination, the FRCS (Tr and Orth).  The fifth and sixth years (ST7-8) are spent in sub-specialty clinical training e.g. foot and ankle, hand, hip, knee, paediatrics, trauma or spinal surgery in readiness for CCT (Certificate of Completion of Training). Following CCT many trainees choose to go on fellowship prior to applying for consultant posts.

Cambridge University Hospital is the major trauma centre for the region. All trainees will rotate through a trauma unit during their orthopaedic training program in the East of England. Research opportunities are present at many of the hospitals for trainees to get involved with.

History of the Rotation

In the early days of the NHS, the aspiring surgeon worked exclusively with an individual Consultant on a “firm” for the whole of what would now be called Higher Surgical or Specialist Training. After pre-registration and registrar posts, trainees would then become senior registrars before being suitably appointed as a Consultant when a vacancy arose.

As surgery became more specialised it was felt that future surgeons would need to work for more trainers to gain experience and so moving between firms between district general and teaching hospital posts were created but there were no formal rotations. 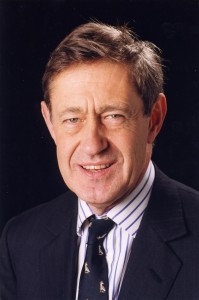 The Calman reforms in 1995 introduced seamless training and career registrar and senior registrar rotations were joined into a 6 year training programme.

The Cambridge Orthopaedic Club was primarily formed to provide an opportunity for past and present trainees to meet together annually socially and professionally. The inaugural meeting was in the University Graduate Centre in 1982 with Alan Murley as president. Since then it has expanded and all members now include current and past trainees as well as trainers. Currently the secretary of the club will preside over the annual meeting 13 years later! It is worth noting that club members include the current president of the Royal College of Surgeons and past and current presidents of the BOA, BASK, BHS, BOFAS, BSSH, BESS and BTS.

It is the responsibility of the current trainees to maintain the standards and traditions of the past, with both their contributions and presence at the meetings.